Throughout 2017 we have been reviewing our foundational truths. Here is Pastor Craig’s recap of his message covering our belief statements on the end times events. 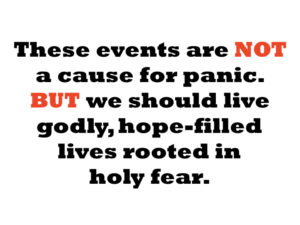 Overarching all of the end times events is a Christian’s blessed hope: “The resurrection of those who have fallen asleep in Christ and their translation together with those who are alive and remain unto the coming of the Lord is the imminent and blessed hope of the church.”

The word “rapture” doesn’t appear in Scripture, but we get this word from the Latin word raptu, which comes from the Greek word harpazo. We first see it when Philip is “caught away” from the Ethiopian’s presence in the desert (Acts 8:39). This is the same word Paul uses when he says that Christians will be “caught up” to meet Christ in the air (see 1 Thessalonians 4:13-17).

Note that the rapture of the Church is not the Second Coming of Christ. His Second Coming takes place at the end of the period known as the Tribulation when Jesus returns to earth as a conquering King and establishes His Millennial Reign on earth (Revelation 19:11-16; 20:1-4).

During Christ’s Millennial Reign, the devil and his cohorts are locked up until the end of the 1000-year reign and are allowed to tempt people one final time. The devil will succeed in tempting quite a few people, as he will once again muster a sizable army to attack Christ and His followers. This decisive battle will culminate in the final judgment.

“There will be a final judgment in which the wicked dead will be raised and judged according to their works. Whosoever is not found written in the Book of Life, together with the devil and his angels, the beast and the false prophet, will be consigned to the everlasting punishment in the lake of fire” (Revelation 20:11-15).

In light of Christ’s First Advent in Bethlehem, and His soon return (His Second Advent), how are Christians to live? In a word: HOPEFUL!

In all of these passages discussing the end times, hope-filled words are used—

Jesus also pointed out that Heaven is a place “prepared for you since the creation of the world,” while Hell is “prepared for the devil and his angels.” GOD WANTS YOU WITH HIM IN HEAVEN!

As you rejoice in the First Advent, remember that Christ’s First Coming was to provide a way for you to have your sins forgiven and be able to spend eternity with Him. So as we look forward in hope to Christ’s Second Advent we say with the Apostle John, “Amen. Come, Lord Jesus!”