As we continued our study of our foundational truths, here is a recap Pastor Craig shared from Pentecost Sunday. 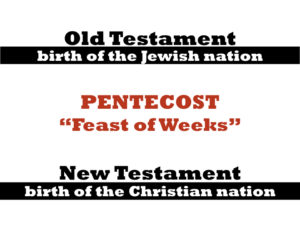 When the Israelites were delivered from Egypt on the night of Passover, fifty days later they arrived at Mount Sinai where God delivered the Ten Commandments to them. This became the birth of the Jewish nation. For millennia following this, not only did the Jewish people observe Passover but they also celebrated “The Feast of Weeks” (also known as Pentecost) fifty days following Passover.

But on the first Pentecost after Christ ascended to Heaven, something amazing happened which was a game-changer for the new Christians. An event which became the birth of the Christian nation.

On that Pentecost Sunday, the Holy Spirit was poured out of Christ’s followers in a way never before seen in history. Although this had never been seen before, it was the fulfillment of something God had promised thousands of years before.

This blessing of the Holy Spirit had been hinted at when God first called Abraham, as He promised that from Abraham would come a blessing for all peoples on earth (Genesis 12:3). Jesus said that this blessing would be realized with the outpouring of the Holy Spirit, and then Peter tied the Day of Pentecost experience to the fulfillment of those promises (Acts 2:38-39).

For the first Christians, the baptism in the Holy Spirit was a normal experience for them following salvation. This baptism gave them power to…

So what’s the controversy? Why do people spend so much time arguing this baptism isn’t for us, or for now? If we start down that path, what else are we going to say is outdated or exclusive for some?

Doesn’t seem much more logical to simply accept what God promised all His people?!

So here’s the question I would ask you—Have you been baptized in the Holy Spirit? If not, why not?